Willpower is the foundation of all human achievements.

Everybody has some willpower.

There are lucky people whose parents and teachers instilled willpower in them from early on. Then there are others who have a lot less willpower.

It doesn’t matter in which group you are. We always feel that we need more willpower. That’s because we tend to use up our willpower no matter how much we have it. It’s called willpower depletion.

You can train your willpower like a muscle. I have collected some of the best willpower quotes to motivate and inspire you.

I added all the willpower quotes images that you can share on your social media profiles.

Tony Robbins: Ultimate Edge Your guide to getting the most out of life regardless of the circumstances that confront you and achieving the results you want. Be it your finances, relationships, body, emotions, time—everything that matters to you most. Take a look at the tools necessary to make your life extraordinary

Here are some of my favorites, starting with Winston Churchill’s quote about willpower: 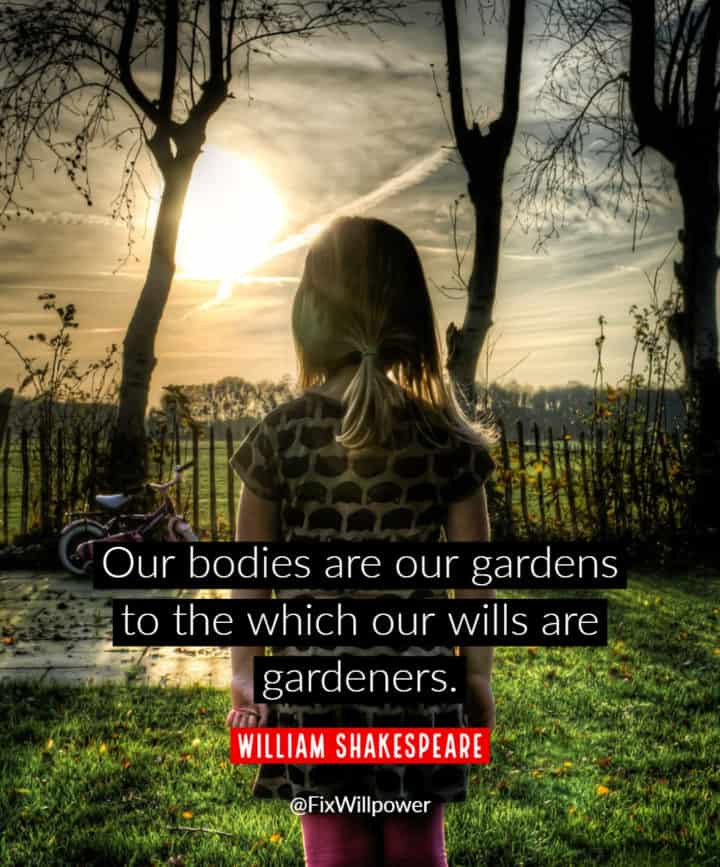 Our bodies are our gardens to which our wills are gardeners. ~ William Shakespeare 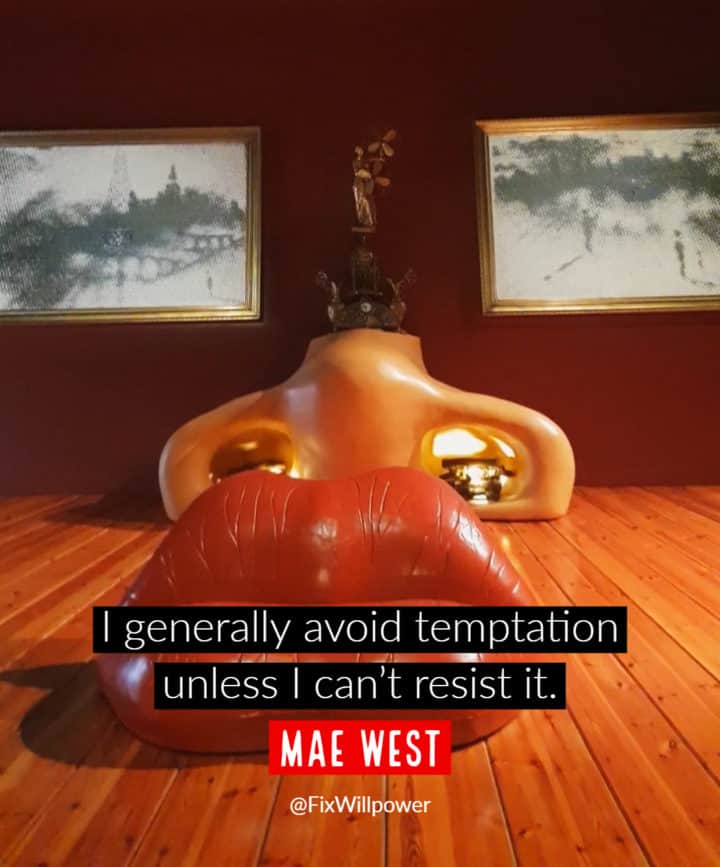 I generally avoid temptation unless I can’t resist it. ~ Mae West

Confront your fear and turn the mental blocks into building blocks. ~ Dr Roopleen

If you can’t run, you crawl. If you can’t crawl– you find someone to carry you. ~ Joss Whedon

The will of man is his happiness. ~ Johann Friedrich Von Schiller

Men can do all things if they will. ~ Leon Batista Alberti

Where the willingness is great, the difficulties cannot be great. ~ Niccolo Machiavelli 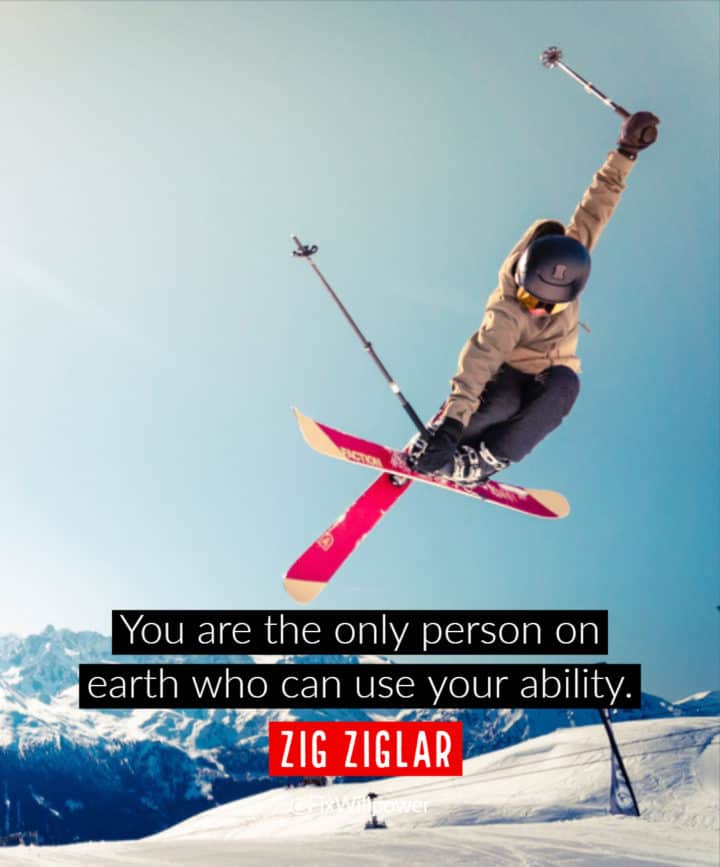 You are the only person on earth who can use your ability. ~ Zig Ziglar

Read next:  What are the Most Important Things in Life?

With but few exceptions, it is always the underdog who wins through sheer willpower. ~ Johnny Weissmuller

Willpower is the ability to eat one salted peanut. ~ Anonymous

Strength does not come from physical capacity. It comes from an indomitable will. – Mahatma Gandhi
Click to Tweet

I am, indeed, a king, because I know how to rule myself. – Pietro Aretino
Click to Tweet

Research shows that willpower is more important than IQ. That’s why the point isn’t to become smarter, but to become more self-disciplined. ― Adam Kirk Smith
Click to Tweet

The will to win is not nearly as important as the will to prepare to win. – Bobby Knight

Will is character in action. – William McDougall

The more things you do, the more you can do. – Lucille Ball

I don’t wait for moods. You accomplish nothing if you do that. Your mind must know it has got to get down to work. – Pearl S. Buck

Nothing is easy to the unwilling. – Thomas Fuller

Willpower is trying very hard not to do something you want to do very much. – John Ortberg

The will is the keystone in the arch of human achievement. It is the culmination of our complex mental faculties. It is the power that rules minds, men and nations. – Thomas Parker Boyd

You are only as lazy or lacking in willpower as you think you are. – Ken Christian

To assert your willpower is simply to make up your mind that you want something, and then refuse to be put off. – Phillip Cooper

Read next:  How Bonuses Reduce Motivation and Productivity [2 VIDEOS]

In the absence of willpower the most complete collection of virtues and talents is wholly worthless. – Aleister Crowley

Willpower is the key to success. Successful people strive no matter what they feel by applying their will to overcome apathy, doubt or fear. – Dan Millman

What is now proved was once only imagined. – William Blake

This in ourselves that we are thus or thus. Our bodies are our gardens to the which our wills are gardeners. – William Shakespeare

Good and evil both increase at compound interest. That is why the little decisions you and I make every day are of such infinite importance. The smallest good act today is the capture of a strategic point from which, a few months later, you may be able to go on to victories you never dreamed of. An apparently trivial indulgence in lust or anger today is the loss of a ridge or railway line or bridgehead from which the enemy may launch an attack otherwise impossible. – C.S. Lewis

Nothing can withstand the power of the human will if it is willing to stake its very existence to the extent of its purpose. ~ Benjamin Disraeli

The best way to think of willpower is not as some shapeless behavioral trait but as a sort of psychic muscle, one that can atrophy or grow stronger depending on how it’s used. ~ Jeffrey Kluger

Most of life’s actions are within our reach, but decisions take willpower. ~ Robert McKee

What are your favorite willpower quotes? Let us know in the comments.

Procrastination Quotes that Inspire You to Act [NOW!]

Let It Go, You Don’t Have to Win Every Time [VIDEO]

How to Get the Skill of Self-Confidence: Dr. Ivan Joseph [VIDEO]

13 Tips and Quotes for Entrepreneurs [Slides+Video]

Founder of FixWillpower.com. I created FixWillpower to help you reach your goals. I have struggled my entire life to be consistent and avoid procrastination. The goal is to have a good life, do the things you love and get your results with minimum effort. FixWillpower website is about how I create motivation and productivity in my life. I write about the tools and techniques, best books, scientific research, and everything else that helps you move faster and stay on track. Minimum effort doesn’t mean slacking off. Minimum effort is about effectiveness and productivity. If there is a way to reach a goal in a shorter time or with less exertion, then you should use that. I will help you be smarter and reach goals faster. About FixWillpower
Tags: attitude, confidence, determination, focus, goals, ig, inspiration, motivation, self-control, willpower